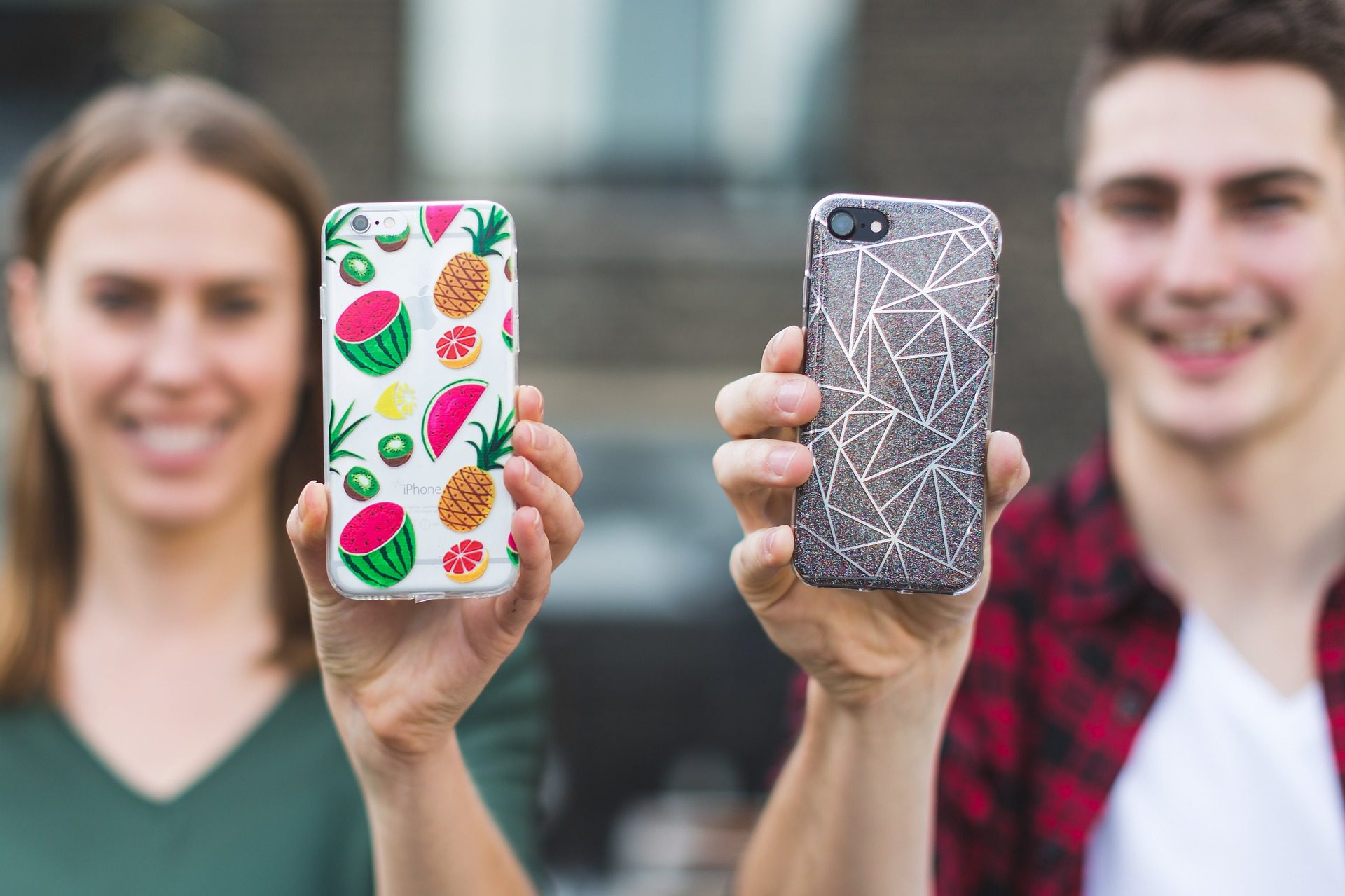 Designer Phone cases come fully adorned with unique art in the form of cartoon characters, quotes, and animals. They express the owner’s sense of style depending on what they pick.

Almost all phone cases that are available on the market today (apart from leather) can be printed on these unique designs and patterns. They can come already printed or you can DIY.

Materials used in the production of designer cases

To make designer cases, an ordinary silicon case or hard case is used. Take for instance silicon cases that are made from synthetic rubber. Using a special printer, the manufacturer directly transfers an image onto the back of the phone case.

Other manufacturers use spot UV printing to print images onto the cases. The cover is later on exposed to ultraviolet light. This hardens the paint making the image permanent.

Read More: How to design logos for t-shirts?

According to research studies, an estimate of about 20% of phone users doesn’t think they need phone covers. 30% only purchase a phone case that can protect their phones. A staggering 50% of the other users prefer a phone case through which they can express their sense of style.

Designer cases are both fashionable and protective. While allowing phone owners to express their sense of style, they also protect phones from day to day drops, scratches, and dents.

Designer phones are well known for their unique styles. They deviate from the norm of having boring basic phone cases.

Unlike every other case that’s uniform in colour and fashion, designer cases allow you to customize the case based on what you prefer. It could have your favourite cartoon painted at the back, or have one of your best quotes. That way you can easily identify it from the rest.

Too much of anything sometimes isn’t all that good. It can just as easily take away the beauty of the phone especially when it’s overly done with the prints and images. Go for a designer case that’s stylish but not too much that it ends up looking like a circus.

If you aren’t someone that finds out what material their case is made of, even designer case material, you’re bound to purchase duplicate designer cases. The art may be okay but beneath it may also be a fake case that’s useless because it won’t be effective.

Just like many other cases you need to be extra careful with designer cases because when your phone lands face flat or on a sharp object, it will get dented.

Those are the advantages and disadvantages that come with designer cases. If managed well using the case can be a fun process.

Sometimes also referred to as basic cases, they are designed for the minimalist phone user. These are usually plain without any loud patterns and prints.

Materials used in the production of official cases

Examples of materials involved in making official cases range from natural marble, wood, and leather. These, however, don’t have room for patterns and designs. Leather material, for instance, keeps the phone looking sleek and neat. They are a perfect choice for people working in offices where things need to be kept professional.

Official phone cases that are made in the wallet and flip design can offer all-around device protection. With these, your phone not only looks professional but is safely protected in case it falls. That way you can do your work comfortably and more assured.

These types of cases are popular in the corporate environment. While at work, these cases reflect on the style and tone of the office. For example, a user that wears a suit and tie needs a professional-looking leather or marbled official case or a wooden one for a more natural touch.

Official cases are not tacky, rather they are simple, clean, and sleek.

Those are the materials that make up official cases, how protective they are, and what makes them so popular. With that said though official cases have advantages and disadvantages. While they may be good at something, they still fall short of another as seen below.

As long as you don’t want an overly fun looking phone case, the official case should be your choice.

The type of phone case you choose is a representation of who you are and your profession. A subtle blue leather official case reflects a cool working environment. It would be a different case if a corporate person picked a phone case with a bright-looking cartoon character yet he works at a law firm. It’s simply a misplaced representation.

Official cases may be related to basic and boring colours which aren’t the case. Official cases come in beautiful colours like pink, blue, yellow, green, purple, and others, just without screaming designs. The designs can also be there for some industries to say for someone that works in the fashion industry. It’s okay to have a leopard print phone case.it represents who they are.

Official cases are designed to protect your phone especially when you’re in a work environment juggling a thousand activities. It’s bound to slip and drop. The official case, however, will prevent it from getting minor scratches or dents.

Most corporate workers tend to prefer official cases that have a flip or wallet design. They provide room to store credit cards, ids, receipts, and loose change, especially for wallet designs. This ends up making them bulky and inconveniencing.

Human beings are naturally attracted to colour and unique patterns. Official cases instead dive away from this in the name of trying to look professional. Much as it may be in line with your profession, others may find it rather dull and boring. So it’s better to spice it up with plain but bright colours like red, sky-blue pink among others.

That’s just about it for designer and official phone cases. You can see there’s a clear contrast between the official cases that more minimal and basic compared to the designer cases that have bright patterns, pictures, and quotes. With the detailed information about them, it’s easier to make a choice on which one of the two is more suitable for you.