Whenever you ask someone what places they’d love to travel to, Italy is always somewhere on the list. This boot-shaped country has never ceased to lose its popularity among travelers, even throughout history, with its rustic villages, bustling cities full of adventure, and its passionate civilization, it comes as no surprise either.

SIghtseeing around Italy consists of opportunities to buy high fashion, experience the beauty of the Renaissance buildings scattered all over the country as well as its rich natural scenery, and last but not least, its mind-blowing gastronomical universe.

From lazing around on the coast of Amalfi to scurrying around the high fashion boutiques in Milan, or learning about how the ancient Romans lived and what happened when Mount Vesuvius erupted in Pompeii, it all creates a perfect amalgamation of excitement and opportunity to learn, experience and discover.

Prepare to be inspired in making your itinerary using this article on the five best places to visit in Italy during your stay, though there are hundreds of beautiful places to visit, so you may need a salary raise to take in its beauty.

Being the capital of Italy, Rome hosts 2.8 million inhabitants and has a curious legend behind how it was founded.

The story goes that Rhea Silvia, the daughter of King Numitor of Alba Longa (a mythical city south of Rome), birthed two boys, brothers, named Romulus and Remus, after being impregnated by the God of War (Mars).

The boys were ordered to be drowned in the Tiber by Rhea’s father’s younger brother, who overtook his older brother’s reign forcefully. The boys survived the attempt and washed up on the shore of the Palatine Hill, where they were suckled by a she-wolf, to then be found by Faustulus, the shepherd.

The boys grow up, raised by Faustulus and his wife, to become leaders of a group of shepherd warriors. The brothers decide to begin a town on the site of where they were found by the wolf, and become successful in doing so, except for one big issue: a lack of women. They decided to abduct the women of the Sabines, and thus Rome was founded (on the seven hills).

So you may be asking, what can I visit though? Well, the city has 900 churches, is a worthy representative of the Catholic faith, all adorned differently. If architecture and religion aren’t so much your thing, but art is, you have the option to visit many captivating galleries, for example, the Galleria Borghese, located in a landscape garden called Villa Borghese. 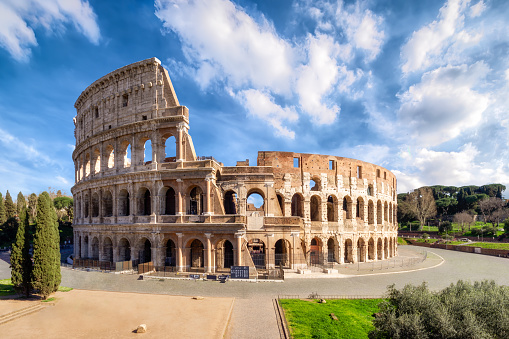 You can also obviously visit the colosseum, the Mouth of Truth, the Vatican, ST. Peter’s Basilica, the Pantheon, the Sistine Chapel, the Roman Forum, many wonderful fountains, and piazzas, as well as delicious trattorias (restaurants).

Beware though, public transport in Rome is far from what you’re most likely used to. There are only two metro lines, many buses, and trams. The issue with it is buses are late frequently. and there are usually crowds on these forms of transport, so a taxi could be a good bet if you can afford it, or just walking. Another option is rentable electric scooters.

If you’re interested in photography, in the salary ranges for photographers, or anything related, Cinque Terre, located in northwest Italy, is the place for you. Now being a UNESCO World Heritage site, it holds five cozy yet magical fishing villages and one of the most beautiful sea coasts you could ever imagine along the Italian Riviera.

The villages are Monterosso, Vernazza, Corniglia, Manarola and Riomaggiore. Each sporting different qualities to them, they all have romantic pastel buildings and their glittering blue sea in common, and a total of 2.4 million inhabitants. 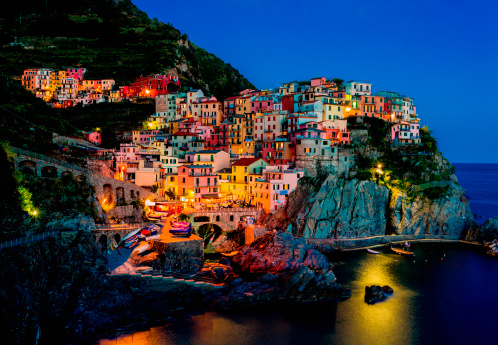 The best time to visit these villages would be from May until October, July and August being the most crowded.

If you travel here, you will come to realize that the main attraction is its natural beauty. You can bask in the sunlight on the cliffs near the coast, swim in the sea, walk and absorb all the breathtaking scenery while stopping for a gelato or a delicious coffee.

The best mode of transportation in Cinque Terre is by foot since public transport is not a reality there and a car would become a liability on all the narrow streets and hills. Instead, you can also try using the train or boating to the nearby villages. Don’t fret though, maps are available everywhere for hikers at train stations, where you can also buy entrance tickets to the trails.

Overall, make sure to book early due to its popularity, and to bring comfy shoes to walk in all day, because this is a trip that is worth the effort.

Before we delve into what to sightsee in Milan, let’s first look at its history.

The city of Milan was founded by the Insubres, who were a Gaulish community. They then got conquered by the Romans, and through many historical events, like being the main capital for North Italy, and almost being bombed to shreds in WWII, it finally became the city it is now, a fashion capital and the second-largest city after Rome, with 1.3 million inhabitants.

From its shiny designer store-fronts to its bustling streets, Milan is one of the most captivating urban places you could visit.

There is an immeasurable amount of sites to see, for example, Milan Cathedral. Standing proud in the Piazza del Duomo, the cathedral is the fifth largest Christian church in the world. It is also one of the most breath-taking examples of gothic-style architecture to this day, ornamented with over 3400 statues, they say it has the most out of any other building in the world.

There is also the Galleria Vittorio Emanuele II, shaped like a Latin cross. Located right next to the cathedral, the galleria houses many high-end brands, including Prada, Gucci, and Louis Vuitton among many others. If you feel up for dinner, it also contains multiple aesthetic restaurants with quality food, including a McDonald’s ironically. 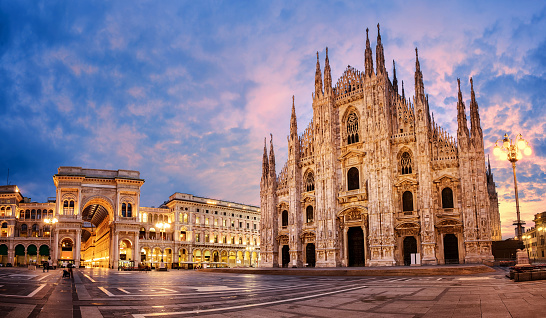 There are many other sites to see, like Leonardo DaVinci’s “The Last Supper”, the Teatro Alla Scala, which is a massive theatre, the Castello Sforzesco (a fortress from the fourteenth century), and so on.

Milan, being such a large city, is easy to travel to whenever you feel, since it is quite easy to find lodging.

Transport is also quite accessible. There are only four metro lines, but they are also the longest network in Italy, being 100km long. Milan also has trams, buses, and taxis available.

It is said of Pisa that it is of Etruscan origin, located strategically close to the sea and the River Arno. Within its timeline of existence, there were also famous families from the Renaissance that resided there: the Medici family and then the

Lorena family, still present there to this day. 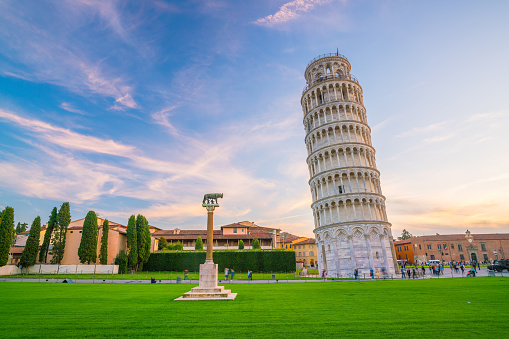 The most famous attraction in Pisa is its Leaning Tower, standing 60m tall. This iconic monument remains greatly popular among tourists to this day, with wacky pictures making their rounds on the internet of people “holding” the tower up.

Among the tower, you can also visit numerous churches, like the Santa Maria Della Spina, one of the most stunning gothic churches in all of Italy.

There are also palaces, like the Palazzo Arcivescovile, Galileo Galilei’s birthplace, and the Lungarnos, which are filled with beautiful buildings and bridges that survived past wars. Lastly, Piazza Dei Miracoli is a marble monument surrounded by lush green gardens, something worth seeing with your own eyes.

Transport and lodging are the same as in Milan, but probably less accessible due to this city being much smaller. 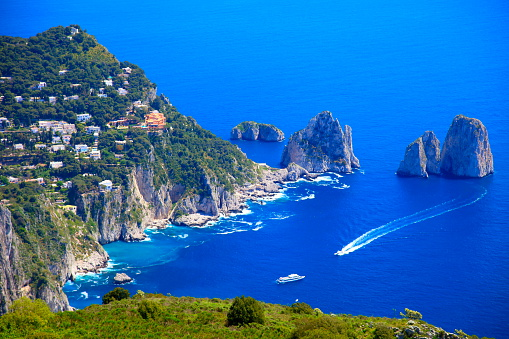 The Amalfi Coast is a great example of the combination of simplicity and luxury. Carefully placed hill villages, agricultural families, and fishermen earning a living by the coast all add to the charm of this southern Italian city located on the coastline of the Tyrrhenian Sea.

No matter your budget, be that a five-star hotel or a small Air BnB, the main attraction you will be traveling there for is the 50km long coastline and the glittering blue sea.

Regarding transport, it may be better to just go on foot, since traffic is unbearable, especially in the summer when there are hordes of tourists, though beware if you have a fear of heights, this wonderful city is unforgivingly steep and hilled.

Other than the sea, the coast’s different villages are sprinkled with enticing ceramic shops, cozy restaurants, and many memorable swimming spots, like the Grotta Dello Smeraldo or Grotta Della Matera, which require you to take a boat to visit them.

Overall, the Amalfi Coast is where you want to go to relax and to recharge, so you can go back home refreshed and revitalized, as well as bronzed from the tan you will get due to the beautiful beaches you can frequent there.