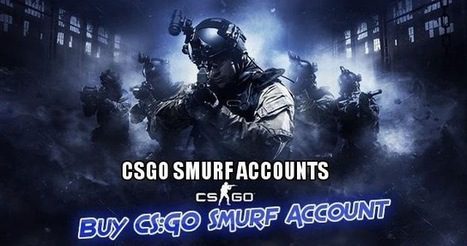 What Are CSGO Smurf Accounts:

Smurfs accounts are a type of alternative account that csgo users can play with. This type of accounts is mostly used by enthusiasts players and csgo high ranked gamers. Although many people are against the concept of smurfing but the high ranked players still make these accounts for their enjoyment. The high ranked players play through the smurf account to humiliate the low ranked players. It is also an alternative to cut off the competition from the beginning by giving tough competition to newbie and discouraging them to play. Having a look at the concept of smurfing on a broader perspective reveals that it has both negative and positive points like all other things. To know more about the negative and positive points of using smurf account keep readings the blog.

Read More: Why Online Fantasy Games Have Evolved In The Last Few Years

The first and major benefit of the smurf account is that it enables high ranked players to get some appreciation without putting into much effort. The high ranked player defeats the low skilled players and feel amazed and also use this account to degrade the new players.

The high ranked players can use these accounts to polish their new skills. In this way, they will master the skill without affecting the rank of their account as losing the match will affect the ranking of the smurf account only. So these accounts help them become more skillful without risking the ranking of their main account and also make the polishing of skill easy as here you will mostly have players that are low ranked or newbies players.

Smurf account is the best way to play with a friend that is new to csgo and does not have much of the skills like you have. Using the smurf account you can play with friends that are at a lower or higher level than you and can enjoy the game. Give you the best chance to spend a good gaming time with friends.

The alternative csgo smurf account gives you the opportunity to play csgo matches with your friends and other players in case of cool down or vac on the main account.

It is also the only source to live the Newbie experience once again boosting up your confidence for coming matches and tournaments in the best possible way.

The major disadvantage of usage of a smurf account is that the lower players get disappointed after playing and losing from highly skilled players. They assume that because losing so many matches they will never be able to achieve higher ranks and will get stuck in the low-rank accounts.

After going through the advantages and disadvantages of smurf account of csgo, you can easily decide whether you want to have it or not.

So if you have decided to buy a csgo smurf account and enjoy the perks, then your next concern must be that where you should buy it from. Ezsmurfs is one of the most reliable and reasonable platforms to buy csgo accounts. All you need to do is visit the site, book the desired account, clear the payment, and get it delivered. The best part about this csgo account provider is that its bots will deliver the account to the buyer after successful clearance of payment. So don’t wait anymore, and buy yourself a cheap csgo smurf account and enjoy playing a low ranked player while being a high ranked player.

Malik Nabeel Ali is a student of Virtual University, Islamabad. He is working in The Odyssey Blog. He is basically inhabitant of Wah Cantt. He is a young SEO analyst. His area of interest is Search engine optimization.